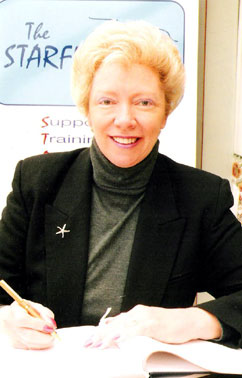 The Starfish Project founder, Anne has been working worldwide for and with stammerers for many years. She has successfully trained many hundreds of stammerers who now know the joy of being able to control the stammer that controlled them for so long.

Feeling frustrated, at the lack of in-depth therapy available for stammerers within the health service. Anne got involved as a volunteer, for the British Stammering Association.

Anne was excited by the potential of diaphragmatic retraining (costal breathing), and some methods that are believed to have been used by therapist Lionel Logue, notably with the late King George VI. However she became very disillusioned by the way that diaphragmatic retraining (costal breathing), was introduced into the U.K. by expensive franchised multi-level marketing.

Believing strongly as she still does, that it is wrong to take financial or psychological advantage of the misfortune of others, or as some therapies do, give false hope or promise of a non-existent cure from stammering, Anne founded The Starfish Project in 1998.

The project is non-profit making, maintaining a cost-covering basis and Anne pledged to keep the course fee at £250, the same as it was fourteen years ago, for as long as we can, to ensure that we make courses available to as many people as possible. Anne also pledged, and still offers, FREE Lifetime support and no fee refresher courses.

It remains Anne Blight's dream that one day Starfish therapy will be available free to anyone that seeks it.

Anne's work was recognised in 2005 when she was awarded The Celebrities Guild of Great Britain 'Unsung Heroes Award' after being nominated by many recovering stammerers.

Whilst other organisations continue to raise their charges we pledge to maintain a cost- covering basis and will keep our course fee at Ł250, the same as it was when we started in 1998, for as long as we can. This is to ensure that we make our course available to as many people as possible. We also offer FREE Lifetime support and no fee refresher courses. It is our dream that one day that Starfish therapy for stammering will be available free to anyone that seeks it.